You can use it as a Headless Device, exploiting the USB ports and the Wireless Connectivity – a powerful Wi-Fi b/g/n and the newest Bluetooth 4.0. You can also use it as a computer, thanks to its 1GB of RAM. The board is compatible with most Arduino shields, sensors, and actuators. UDOO Neo Development Board (Extended) is also compatible with UDOO Bricks: programmable modules, like the temperature sensor and the barometric sensor, that you can add to make UDOO Neo Development Board (Extended) even more versatile.

UDOO Neo Development Board (Extended) can be powered in three ways. You can use: 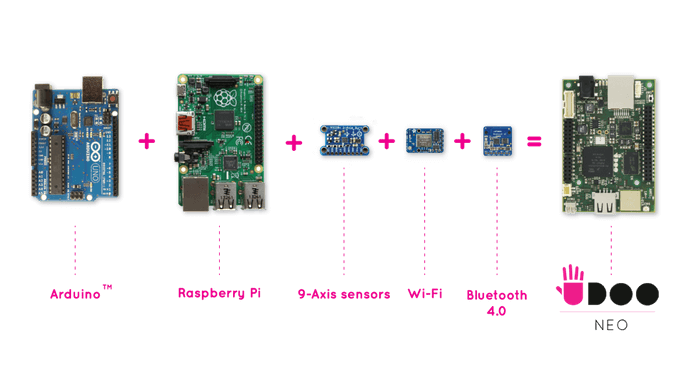 UDOO Neo embodies a new concept: a single board computer suitable for the Post-PC era: 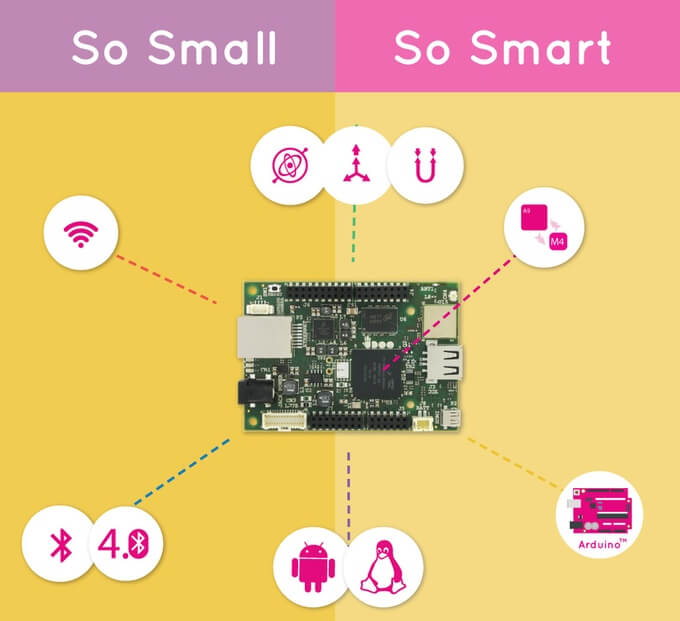 What makes UDOO Neo different from Raspberry Pi or Arduino™?

With UDOO Neo making things is a piece of cake! Do you want to build a drone, a robot, an installation? Are you looking for a simple and energy-efficient server?
Heterogeneous Processor 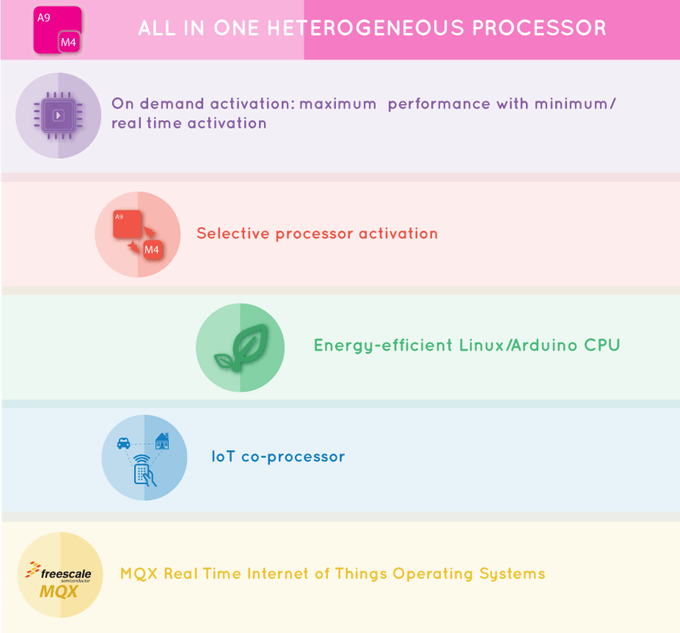 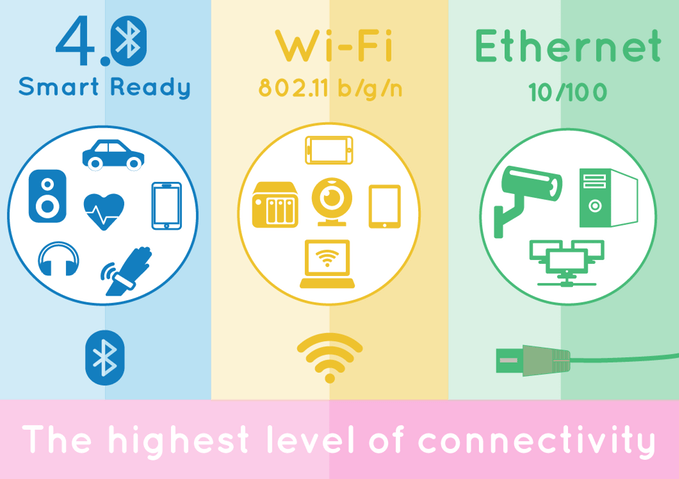 UDOO Neo also embeds Wi-Fi Direct Smart Config. How does it work? It’s very simple: you connect your UDOO Neo to another device via a P2P connection, regardless of whether you have a wireless access point or not.
Finally, with UDOO Neo you can always rely on fast ethernet RJ45 (10/100 Mbps).
The Internet of Moving Things 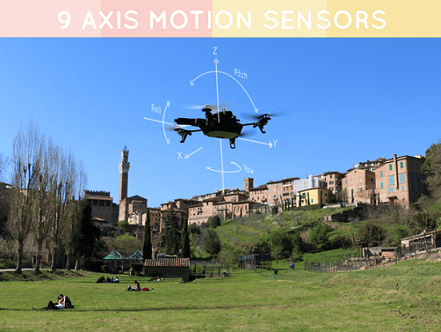 The Internet of Things is here, all around us. From smartphones to wearables, from smart appliances to M2M applications, sensors are everywhere, and bring a world of data about moving things into the online realm.
UDOO Neo embeds 9-axis motion sensors (accelerometer, magnetometer, digital gyroscope) directly on the board. This way, you can build a drone that automatically adjusts to a perfectly stable horizontal position if there is wind. Or connect it to your motorbike and measure your riding skills, using it as a smart tracker for motorbikes. The only limit is your creativity!
Not to mention the compatibility with analog sensors. Temperature sensors, potentiometers, light resistors and many others sensors are analog, and most other boards are only compatible with digital sensors.
A pocket computer 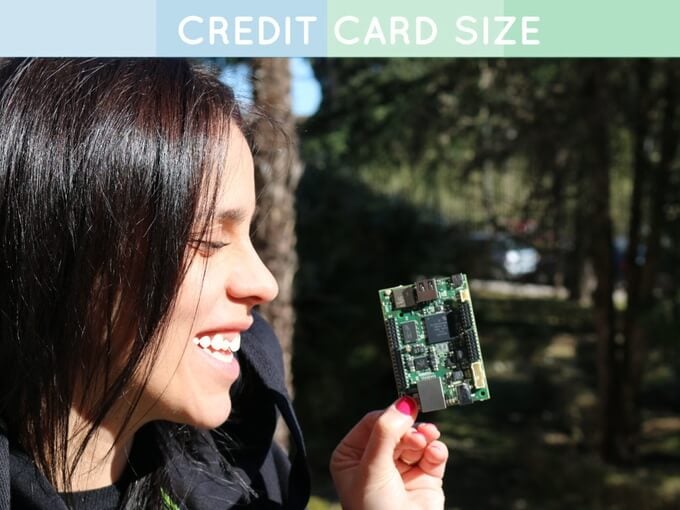 UDOO Neo is a credit-card sized single board computer: our current prototypes are 59.3mm x 85mm (3.35″ x 2.33″).
UDOO Neo is indeed a pocket computer. Bring it with you wherever you go. Simply attach it to the USB port of your computer to power-it up.
Alternatively, you can use an external battery to power it up, like you would with your smartphone.
Otherwise, just attach it to a 12v power supply, a mouse and a keyboard through its USB ports or to your tv/monitor through the micro HDMI port, or LVDS touch display.
A truly flexible development environment
On UDOO Neo, thanks to the powerful Cortex-M4, you can run Arduino™ sketches using the standard Arduino™ IDE. UDOO Neo is compatible with all the sketches, tutorials and resources available from the Arduino™ community.
On UDOO Neo, thanks to the efficient Cortex-A9, you will be able to run both Android and Linux, and just by switching the SD Card, you can shift from Android to Linux in a flash. 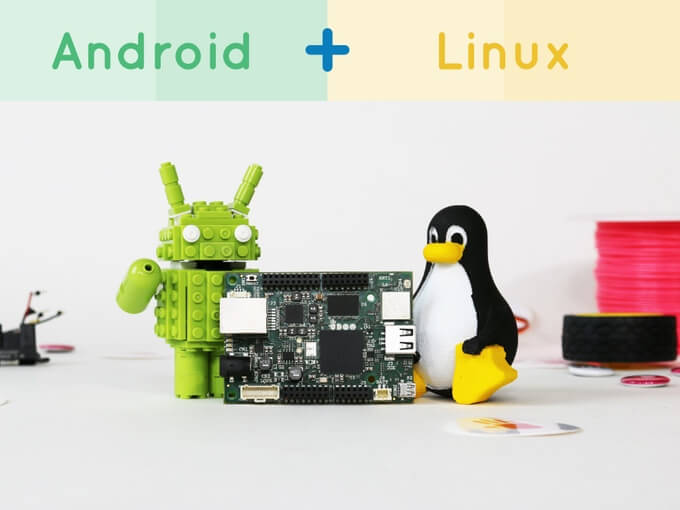 UDOO Neo supports Android Kitkat 4.4.3. It will be a Vanilla Android: an Android version without any customization, in order to allow you to fully customize.You will also be able to install Google Apps like Google Play, Chrome, Google Now, YouTube and so on.UDOO Neo is the perfect platform to program in the Cloud due to its unprecedented connectivity. However, we won’t force you to use a proprietary cloud service. You can program locally, without staying connected or relying on proprietary servers. Or you can program in the Cloud. There are several open-source solutions online you can already use to program in the Cloud through UDOO Neo.

UDOO Neo and Education: a creative playground for students and teachers. 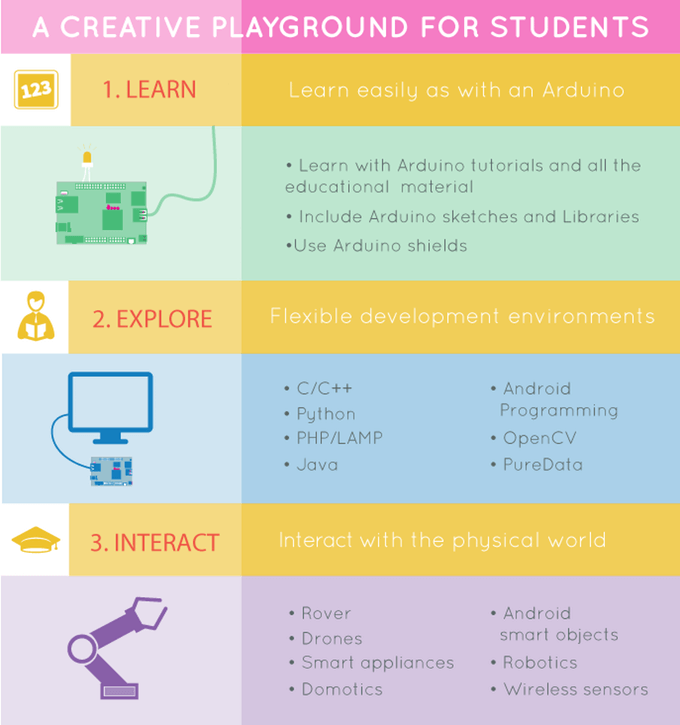 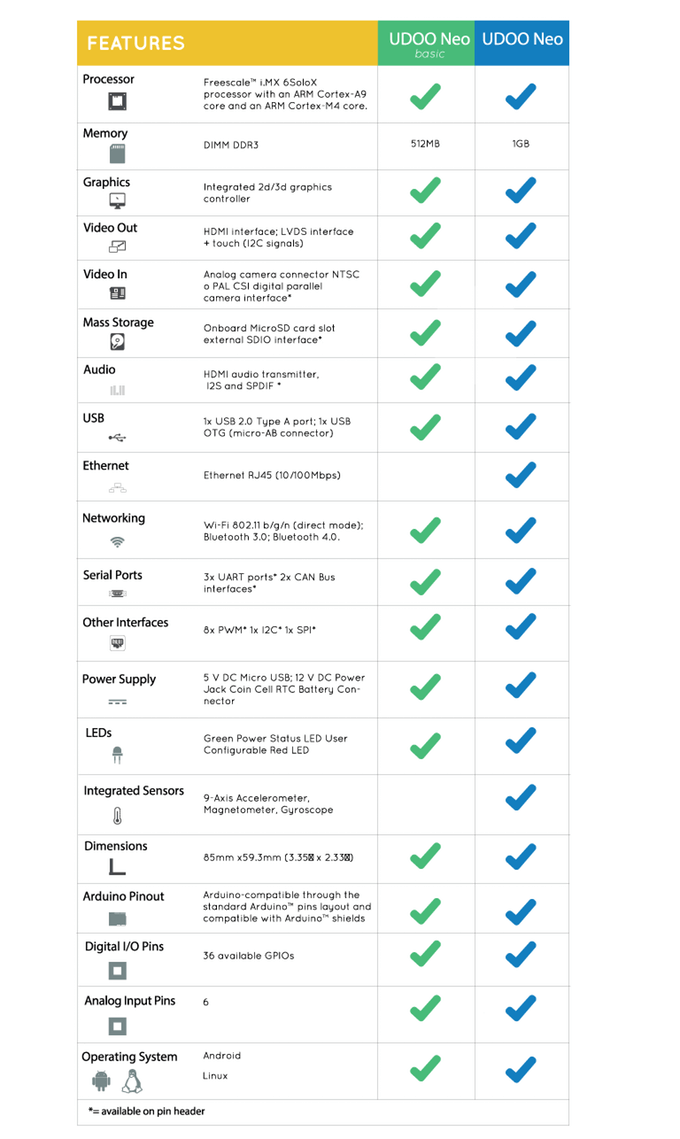 For detailed specification please refer to the Datasheet of the product.