Although originally intended for telephone use, DTMF tones are now routinely used when code numbers must be sent through channels that were originally intended for audio data. Among other things, DTMF tones can be recorded and played back later. In the touch tone system, each button on the telephone keypad is represented by a combination of two sine-wave tones, one “low tone” and a “high tone”. The low tones indicate what horizontal row the pressed button is in, while the high tones correspond to the vertical column of the button. Using this we are supposed to display the text on the LCD on the other side, the receiving side. So whatever we type on mobile will be displayed on LCD.

Here we are implementing the same technology to design a typing system where we can type data on remote location LCD by pressing the mobile buttons on the other mobile in infinite range only network should be available. The main advantage of this project is that any person cannot hack your massage. 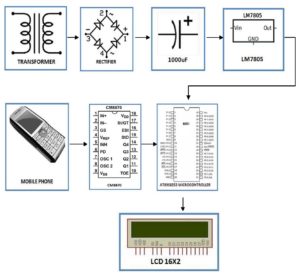 Be the first to review “DTMF Based Typing” Cancel reply